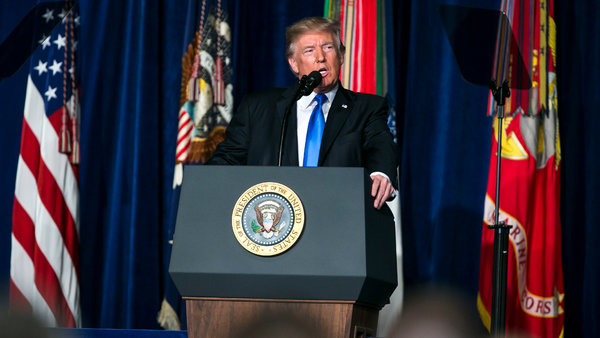 Mr. Trump’s comments came a day after he indicated that the U.S. forces would not completely withdraw from Afghanistan

During The Conference, A Media Journalist Asked To Him About The Grewing Back Of Terrorism In Afghanistan. Trump Answered This Question Very Clearly! He Said That “We Have 100% Wiped Out Terrorists From Afghanistan And We Did It In Record Time”. But Other Countries Are Contributing Very Less Effort To Wiped It Out From The Root.

Trump Also Gave A Soft Warning To Other Nations. He Said That, All The Other Nations Also Have To Fight With It Because We Are Not Going To Stay There For One More 19 Years Anymore. Answering The Journalists, Trump Said That Look At Neighbour Nations Of Afghanistan Like India And Pakistan, They Are Just Next Door To The Afghanistan But Didn’t Putting That Much Of Effort To Completely Wipe Out Terrorism Forum Afghanistan.

Mr. Trump also said that the U.S. under him had decimated IS. “We haven’t been hearing much about IS. We took the caliphate 100 per cent. When I took it at 98 per cent I said all right, maybe we go home now, let these other countries in. Everyone went crazy. They said do 100 per cent. They said it was going to take a year. It took me a month and they are gone,” he said.

Asserting that the caliphate was gone, he said the U.S. was holding thousands of IS fighters and Europe had to take them. And if Europe doesn’t take them, Mr. Trump said, he would have no choice but to release them into the countries from which they came, which was Germany and France.

“We beat them. We captured them. We’ve got thousands of them and now as usual our allies say, no, we don’t want them even though they came from France and Germany and other places. So we’re going to tell them and we have already told them take these prisoners that we’ve captured because the United States is not going to put them in Guantanamo for the next 50 years and pay for it,” Mr. Trump said.

admin - June 29, 2020 0
The Indian government on Monday took an unprecedented step As tensions along the Line of Actual Control (LAC) with China continues, the Government of...

fcs up gov in UP Ration Card List Search Name and...

Aham Brahmasmi: Sacred Games 2: Expectations vs Reality (We Are Disappointed)

admin - August 22, 2019 0
Sacred Games 2 was released on Netflix recently on 15th August. Although the series is approximately 7 hours long, many of the fans who...

Trump Said: India And Other Nations Also Have To Fight With...

admin - August 22, 2019 0
A Very Big Update Is Coming From Washington. US President Donald Trump Said That “Only US Is Fighting From Terrorism Which Is Again Growing In Afghanistan”....

Bollywood 10 Most shocking and Embarrassing Moments Caught On Camera

admin - July 23, 2019 0
JOIN TELEGRAM GROUP -> JOIN Embarrassing moments are quite common in all our lives. Be it /Hollywood or Bollywood, it can occur anytime and at...
© Apni Media | Created With ❤ by Hackit Sagar