At its iPhone 12 event, Apple debuted the HomePod mini with an all-new spherical design and impressive list of features and specs priced at $99 — $200 than the list price of its bigger brother. Read on for a detailed HomePod mini vs HomePod comparison.

We’ve talked about the value of Apple expanding the HomePod lineup with a smaller speaker at length and is something that many people have been waiting for. Now the HomePod mini is official and it comes in at an enticing $99, but how does it stack up against the full-sized HomePod?

HomePod mini packs most of HomePod’s features in a smaller spherical design that keeps the same touch-sensitive top for controls. Notably, it even includes some enhancements that HomePod doesn’t include like the U1 ultra wideband chip and Thread. The U1 chip will enable an improved handoff that “you’ll feel” as well as personalized listening suggestions on your iPhone when you’re near HomePod mini.

It’s great that the new Intercom feature is arriving for both the new HomePod mini as well as the existing HomePod. Most of the other major features of the original HomePod are included with the mini like multiroom audio, stereo pair support, smart home hub, 360-degree audio, far-field microphones for Siri support, computational audio, and more.

The new “Home theater with Apple TV 4K” is limited to the full-size HomePod as is spatial awareness. The latter feature allows HomePod to adjust audio based on its surroundings.

The HomePod mini tech specs page doesn’t mention the inclusion of direct and ambient audio beamforming that HomePod supports and the smaller speaker has 4 far-field microphones, instead of the 6 on HomePod. But in reality, those shouldn’t be deal-breakers by any means.

The other major difference is going to be HomePod including a woofer and seven-array tweeter setup while HomePod mini uses a “full-range driver and dual passive radiators.” That means it certainly won’t match HomePod’s audio performance overall, but Apple still says it puts out amazing sound and will likely outperform similar small smart speakers like Amazon’s Echo Dot.

Jam-packed with innovation, HomePod mini delivers unexpectedly big sound for a speaker of its size. At just 3.3 inches tall, it takes up almost no space but fills the entire room with rich 360‑degree audio that sounds amazing from every angle.

As for processors, Apple’s S5 chip that powers the Series 5 Apple Watch is used for the HomePod mini, meanwhile HomePod uses the A8 chip.

The new HomePod Mini is clearly smaller than the original HomePod, measuring just 3.5 inches tall, as compared to the 6.8 x 5.6-inch cylindrical shape for the latter. The design too is new, with the HomePod a rounded, spherical shape with more emphasis on pushing out 360-degree sound from all angles. Colors, though, don’t get an update — we’re still relegated to the space gray and white options.

The original HomePod, which is still for sale, has a cylinder-shaped body covered in an audio-friendly mesh. It’s packed with seven tweeters, one woofer, and an array of six microphones, coming in just two color schemes, space gray and white. The top shows when Siri is listening and being used, by showing a rounded and colorful light changing.

The new HomePod Mini is certainly different inside. There is a full range dynamic driver, a pair of passive radiators for optimum bass, and an acoustic wave guide for 360-degree sound experience. Inside is an array of three microphones, fewer than the original HomePod, plus one turned inward to help Siri respond and hear people speaking even as it’s playing music or other audio content. 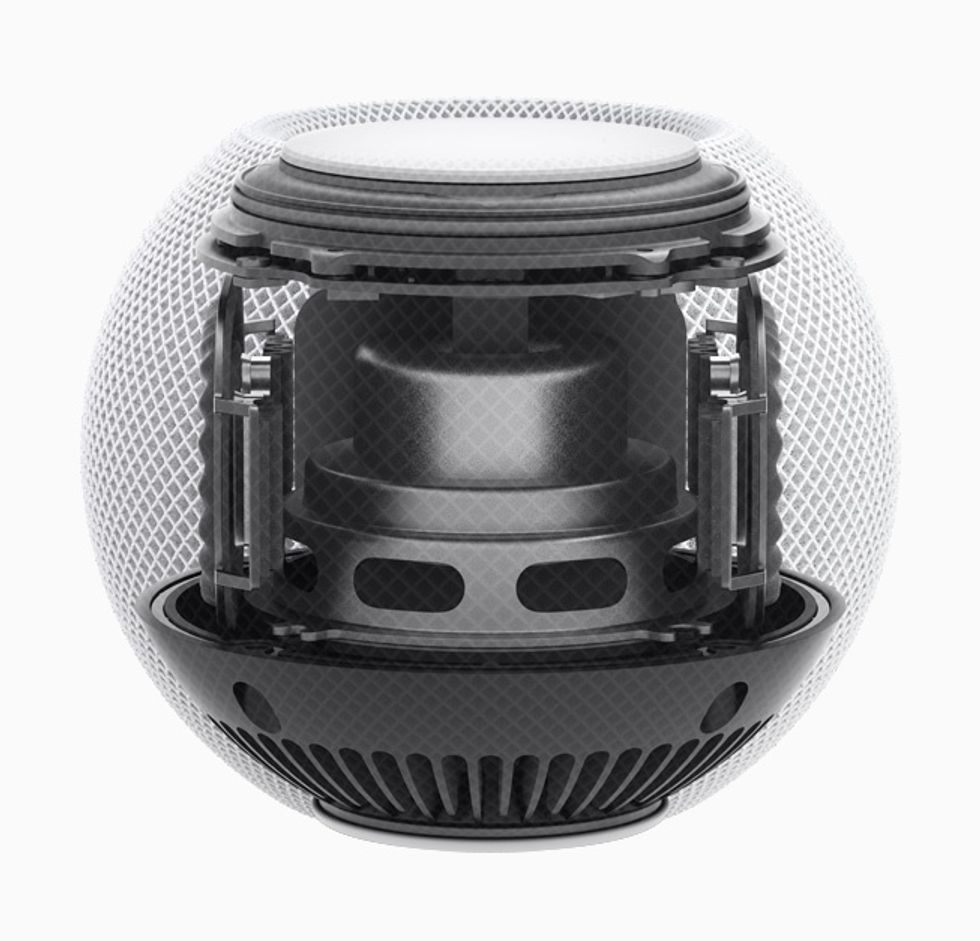 At $99, HomePod mini looks positioned well to fit a variety of great use cases where HomePod is overkill for rooms, apartments, and other settings. It also looks like a great value proposition for those who want to stay in the Apple ecosystem without dropping $200-$300 on HomePod.

HomePod mini preorders go live on November 6 with availability from November 16. What do you think? Will you be picking up a HomePod mini? Share your thoughts in the comments below!

How much lower is the price? Well, the original HomePod debuted at $349 in 2018, easily the most expensive of all the smart speakers on the market at the time. (Then, one could pick up a Google Home for as low as $79 and an Amazon Echo (2nd Gen) for as low as $69.) The price, in fact, put it more in the territory of a premium home speaker, like those made by Sonos and Bose. And the sound quality it promised also planted more into that territory as well.

The HomePod Mini is also $200 less than the original Home Pod, which is still available at $299.

Worth buying homepod mini or upgrading?

The new HomePod Mini, priced at $99, is a smart speaker that packs Siri inside, but also continues to emphasize a music device that can play music, podcasts and more, even in stereo if you pair two. You lose some of the elements from the original HomePod, a small microphone array and the loss of dedicated physical elements for a computational audio tool, but Apple is very clearly aiming at for the home user is not someone looking for a premium audio device.

In that way, the HomePod Mini is designed for the Apple consumer who has yet to step into the smart home space, or may be using a Nest Audio or Amazon Echo, but would like to see what it would feel like to have a speaker that controls their Apple devices, from their Apple TV to other branded products like Philips Hue lights, Wemo smart plugs, and other connected devices that can folded into HomeKit.

At $99, the HomePod Mini — a decent speaker for listening to music or podcasts too — may be finally a worthwhile leap for Apple users to try, a smart home device designed specifically for the Apple space, at a price point that makes choosing one hard to resist.

admin - October 14, 2020 0
OnePlus 8T 5G Price in India, Specifications, Launch Live Updates: OnePlus set to launch the 8T 5G at its event which will begin at...

admin - October 14, 2020 0
Here’s how HomePod mini compares to HomePod At its iPhone 12 event, Apple debuted the HomePod mini with an all-new spherical design and impressive list of features...

Apple iPhone 12 All Model Overview: Everything We Need To Know

Uber currently permits you to pay for rides by means of...